Evergreen forests to enchanting views, Nelliyampathy is not the clichéd ‘hill station’

Weary of all the regular tourist attractions in Kerala, destination fatigue had set in and I was scouting for an escape from the sweltering heat and humidity of the sultry plains of Palakkad. So I headed to Nelliyampathy, a mountain retreat in the Sahya Range.

As I drove out of the city limits into the countryside, it transported me into the heart of rustic India. After an hour’s drive from Palakkad I tarried awhile at the Pothundi reservoir which marked the start of our ascent complete with the 10 hair pin curves. One has to negotiate these bends to reach this virtually untouched locale. 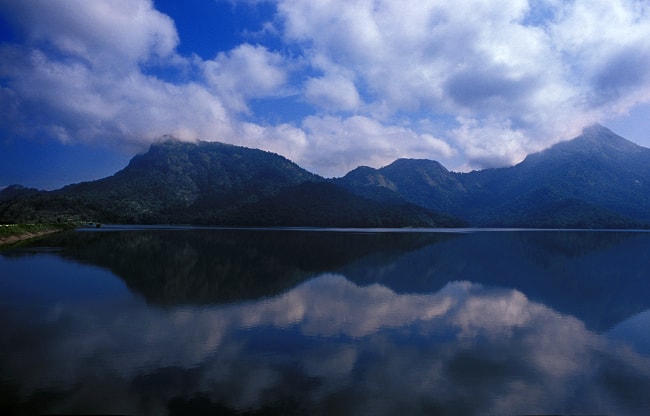 Pothundy reservoir glistening in the distance.

As our jeep cleaved through dense evergreen forests virtually canopied by the foliage, I was bowled over by nature’s benevolence everywhere. I stopped at every bend to gaze and click pictures of the cascading waterfalls hurtling down the hillsides.

From further up, I had glimpses of the Pothundi reservoir gleaming like a sapphire set amidst the green canopy of the forests. In this pristine stretch, I could see varying shades of greenery. The cacophony of avian fauna kept us company. I had a splendid view of the Palakkad Gap, a geographical phenomenon in the Western Ghats formation in this region, bringing into view, parts of the adjoining state of Tamil Nadu.

As the jeep clambered up, the forest receded and hills swathed with plantations of tea, coffee, aromatic cardamom groves and pockets of gooseberry trees loomed into view. Pepper interspersed with rows of ubiquitous silver oaks and luscious oranges hanging from orchards added varying hues to the landscape. 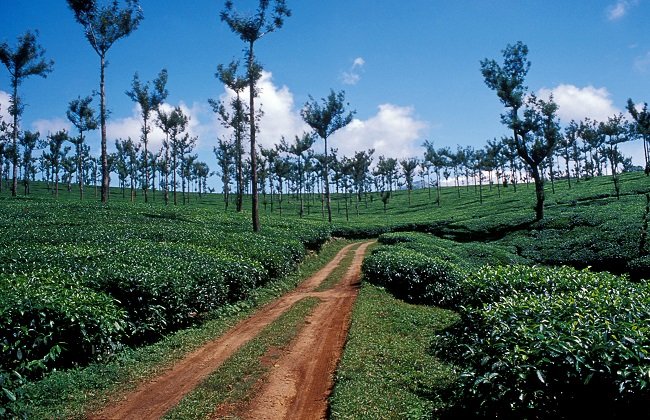 Situated south of the Palakkad Gap, and adjoining the popular wildlife sanctuaries of Parambikulam, Anamalai and the Peechi-Vazhani, Nelliyampathy is luxuriant with flora and fauna and a corridor for wild animal movement. The Nelliyampathy Range consists of a chain of ridges cut off from one another by valleys which abound in dark evergreen and semi evergreen forests.

This range, which was once owned by the Maharajas of Kollengode and Kochi, forms the southern boundary of the Palakkad Gap and rises from the plains. The highest peak in Nelliyampathy is Nellikotta or Padagiri which is 1,505 metres above sea level.

There are some pockets of nelli (gooseberry) that is said to have given Nelliyampathy its name. Another version attributes the name to the Kadar tribes who had a hamlet or pothi near Nellikolam. Hence Nelliampothi in due course of time became Nelliyampathy. 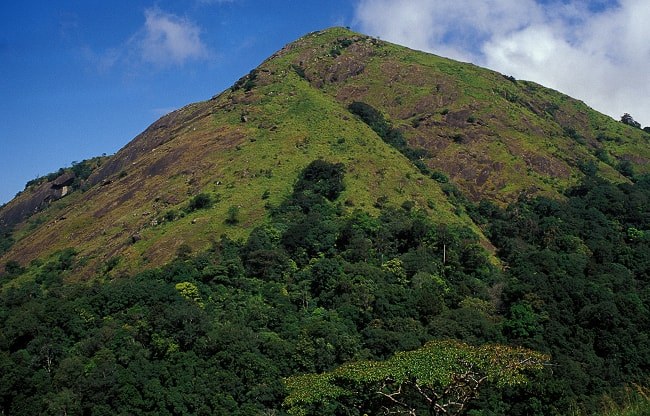 In days of yore, Nelliyampathy’s claim to fame was its luscious oranges grown at the Agricultural Research Station. These fruits were carted to feed the British troops during the World War II. They were so popular that cartons of these fruits were shipped in those days to the Queen of England. Now the fame of this enchanting hill station rests on the aroma of coffee, cardamom and the tardy plant that has bequeathed to the Keralite his much-loved cup of chaaya (tea).

During my visit to an estate, the manager explained the intricacies of planting, sifting, sorting, curing and the nuances of the different varieties of coffee such as Robusta and Arabica. I also saw the old cardamom curing centre where the cardamom used to be dried, separated, graded and packed.

Interestingly, Nelliyampathy does not have the clichéd ‘hill station’ stamp. Nestled at a height of 4,600 ft. above sea level, it is distinctly different from others of its ilk. What struck us about Nelliyampathy is that it is sans any frills of a typical colonial hill resort amazingly unexplored by a large influx of tourists. There’s no high-pressure sightseeing. 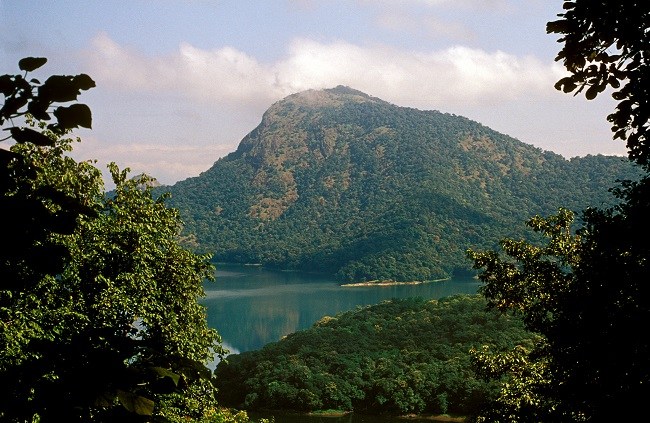 Nelliyampathy is not as celebrated as Munnar. The best way to discover this locale is to take a casual stroll or drive out to the myriad vantage points. If you are adventurous, set out on these lesser trodden routes to savour some pristine wilderness not normally seen on the tourist itinerary. If one is lucky, one is sure to spot endangered animals like the Nilgiri Tahrs and the lion tailed macaques en route.

I embarked on a birdwatching spree and spotted a bewildering variety of birds in the abandoned estates and the scenic environs of Nelliyampathy. The twitters, orchestrated by myriads of birds, are a treat to the ears. But what makes it so special is the mellifluous song of the Malabar Whistling Thrush or the Whistling Schooling Boy pervading the air.

The hills around Nelliyampathy are alive and bustling with a multitude of picnic spots. I ventured to Sitarkundu at Karuna plantations. Sita and Lakshman are believed to have stayed here during the Vanavasa. It is said that Sita Devi took bath at the waterfalls here. A tall gnarled tree here is one of the major attractions. 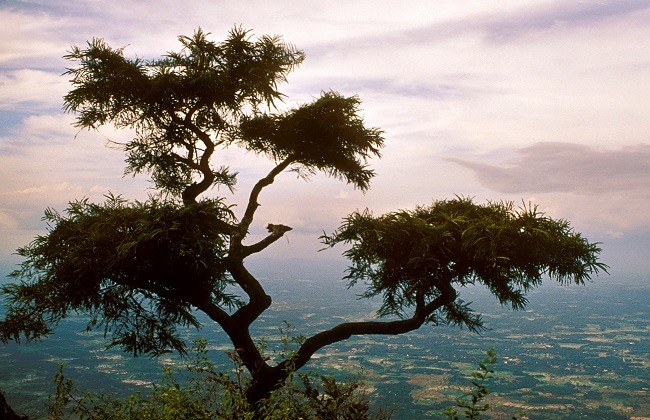 A tall gnarled tree at Sitarkundu.

The drives out of Nelliyampathy are interesting especially the one leading to Sitarkundu offering a fantastic view of the plains as far as even Palakkad town and the surrounding countryside. We also stopped by the hoary Victoria Church, a relic of the Raj perched on a small hillock. The Government Orange & Vegetable Farm is worth a stop if you want to pick up jams, preserves and squash of fruits. 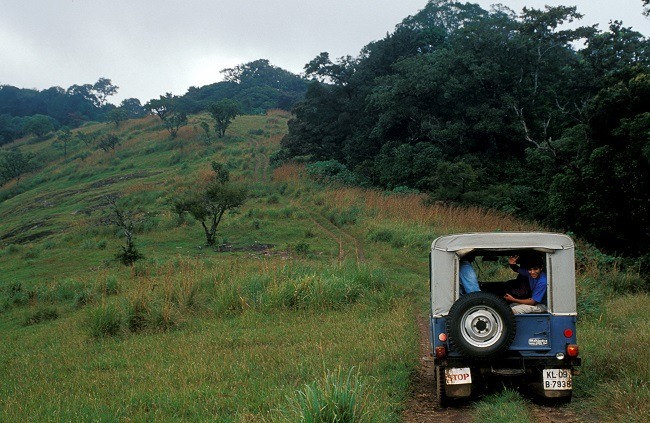 The vertical climb to Mampara, a knoll in Nelliyampathy.

I culminated my trip with a visit to Mampara, a knoll from where I had a stupendous view of the entire Palakkad Range. After a two-hour journey in a semi-open four wheel drive, through a treacherous terrain, I reached Mampara. The rickety jeep drive beyond an estate was unnerving and twisted up my insides. 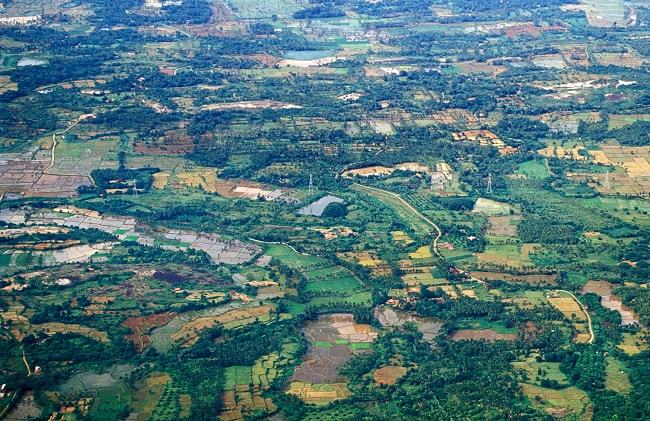 Panoramic views of the plains from Mampara.

Braving the chill and the ferocity of the wind, I waited patiently for two hours for the mist to clear and click. As it cleared, I had incredible views of enchanting dales, verdant slopes, thick forest and a patchwork of lush paddy fields.

Major parts of Palakkad, the dams of Malampuzha, Chulliyar, Meenkara, Mulathara and Walayar and parts of Parambikulam, Pollachi, Coimbatore and Mettupalayam in Tamil Nadu were also visible. Descending the quaint hill station, I realized that Nelliyampathy was indeed God’s gift to the sweltering heat of the sultry plains of Palakkad.

Master plan for Kovalam on cards